Look for my novels Murder Trial of the Last Lakota Warrior  and The Last Ram at your favorite bookstore, Amazon.com or any online bookseller! 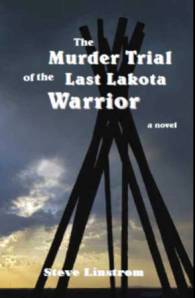 In the aftermath of the Wounded Knee Massacre, a young Lakota warrior stands trial for murder in Sioux Falls, the 1891 Divorce Capital of America. Plenty Horses admits to shooting an Army Lieutenant; but was it an act of War? Laura, a beautiful New York socialite escaping an unhappy marriage and Morgan, a former member of the Seventh Cavalry haunted by the memories of Wounded Knee, form an unlikely team, exposing the forces looking to execute Plenty Horses.

The culture of the West, the politics and racism of the day and a sense justice for native people clash, with the fate of a young Lakota warrior at stake.

It’s1903 in the Badlands and Evan Warner, a store owner’s son, spies an elusive Audubon Sheep that was thought to be extinct. Even better, his best friend David, an adopted Lakota boy, is returning from two years at the Pierceson Indian School. Evan can’t wait to track the sheep through the Badlands with David just like when they were younger. As hunters from across the globe pour into the small town of Interior to pursue the last of the species, Evan learns that becoming a man isn’t all about bravado and that people and friendships grow and change. The end of the ram could have lasting repercussions for the boys and the West.

The Last Ram was a quarterfinalist in the Amazon Breakthrough Novel Contest in the General Fiction category in 2010 and in the Young Adult category in 2011. It was second in the 2014  Arizona Literary Magazine national contest for Published Fiction.

Available in both Paperback and Kindle at Amazon.com.